A childbirth educator once wondered why a doctor wasn’t 100% sure if a baby was breech or head down. He suggested an ultrasound (sonogram) to verify baby’s position.

Breech is sometimes difficult to tell with palpation (feeling the abdomen with the hands), and other times quite easy to tell. Even if the doctor is sure, s/he’ll recommend an ultrasound (sonogram) to get hard data to enter into the mother’s chart.

Pregnant parents use this video to improve fetal position (breech, transverse, posterior) You could be one of these parents. There is a brief demo on using the breech tilt and forward-leaning inversion together. We now suggest coming up to a high kneeling position after doing the Forward-leaning Inversion for 30-35 seconds. See more on when and how often to do this and other activities to allow your breech baby to find the room to turn head down themselves or make it easier if the doctor manually turns the baby.

Spinning Babies Parent Class video walks you through all first steps we recommend for helping your baby turn head down on their own, or making an external version easier & more successful. Plus, you will learn the Spinning Babies® approach using balance, movement, and gravity for comfort in pregnancy and an easier birth. You can also try our self-directed program for Helping a Breech Baby Turn.

See more about how to Flip a Breech.

Ultrasound (imaging) for breech position is a parent’s decision

Some considerations  to use ultrasound could be:

Ultrasound is justified if your care plan will change based upon what was found by an ultrasound examination. But ultrasound itself is not without risk.

Abdominal examination of the breech baby

Some of the breech positions

Parents may well want to see “proof” of breech presentation as well, to prepare themselves and make choices for childbirth. Finding out that the baby is breech can definitely change birth plans, whether to plan a cesarean or make the necessary preparations, sometimes including travel, to find a safe breech practitioner. Learn more using The Belly Mapping®️ Workbook. There is a section with illustrations on figuring out if your baby is breech (after 30 weeks or so) and what to do about it. Here is a picture of palpation and drawing the findings of the breech presenting baby on a Sunday, when baby was still breech. The mom did a forward-leaning inversion that night and the next day, Monday, before her scheduled ultrasound. At the ultrasound appointment, we found out the baby had flipped head down! 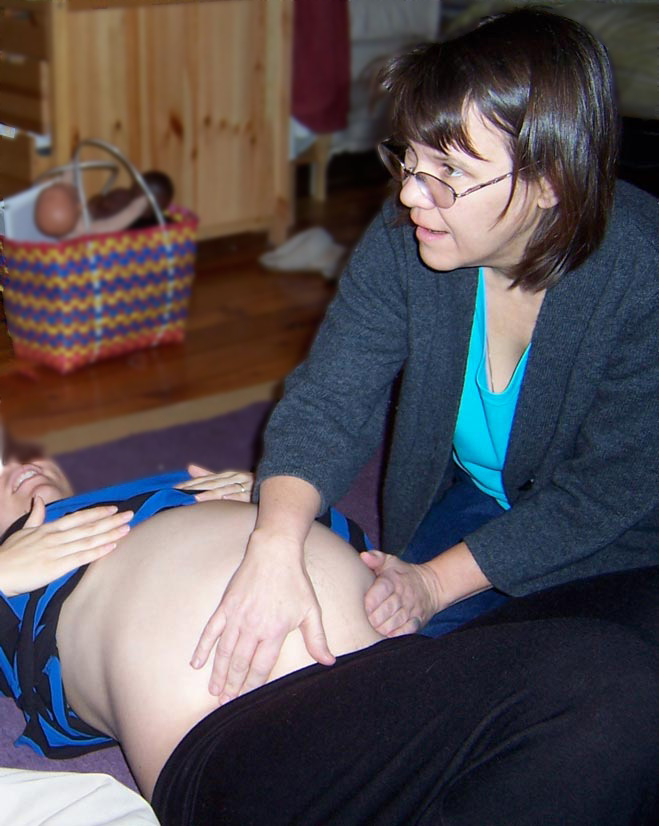 Gail feels the shapes of the presenting parts of baby. Is it a head or a bottom?

With palpation, we look for a cylinder shape coming from the firm bulge at the top of the fundus. This is the thigh coming off of the buttocks. 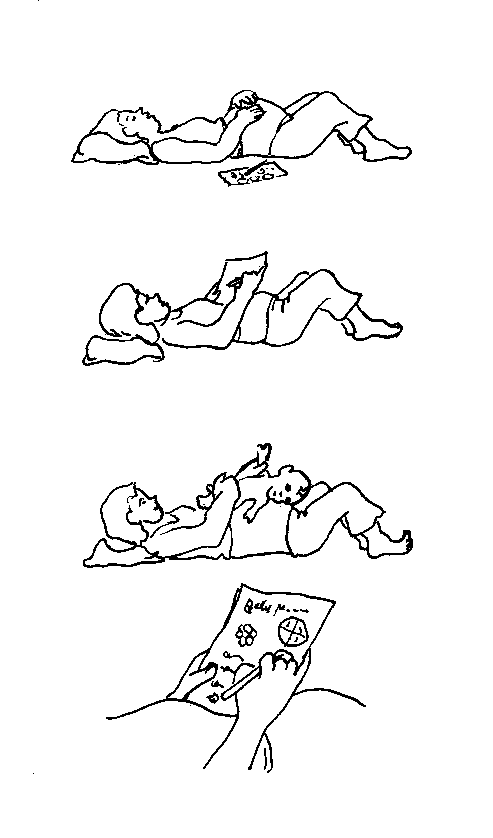 If we find cylinders low in the abdomen and a firm ball at the top, we are considering a possible breech position. 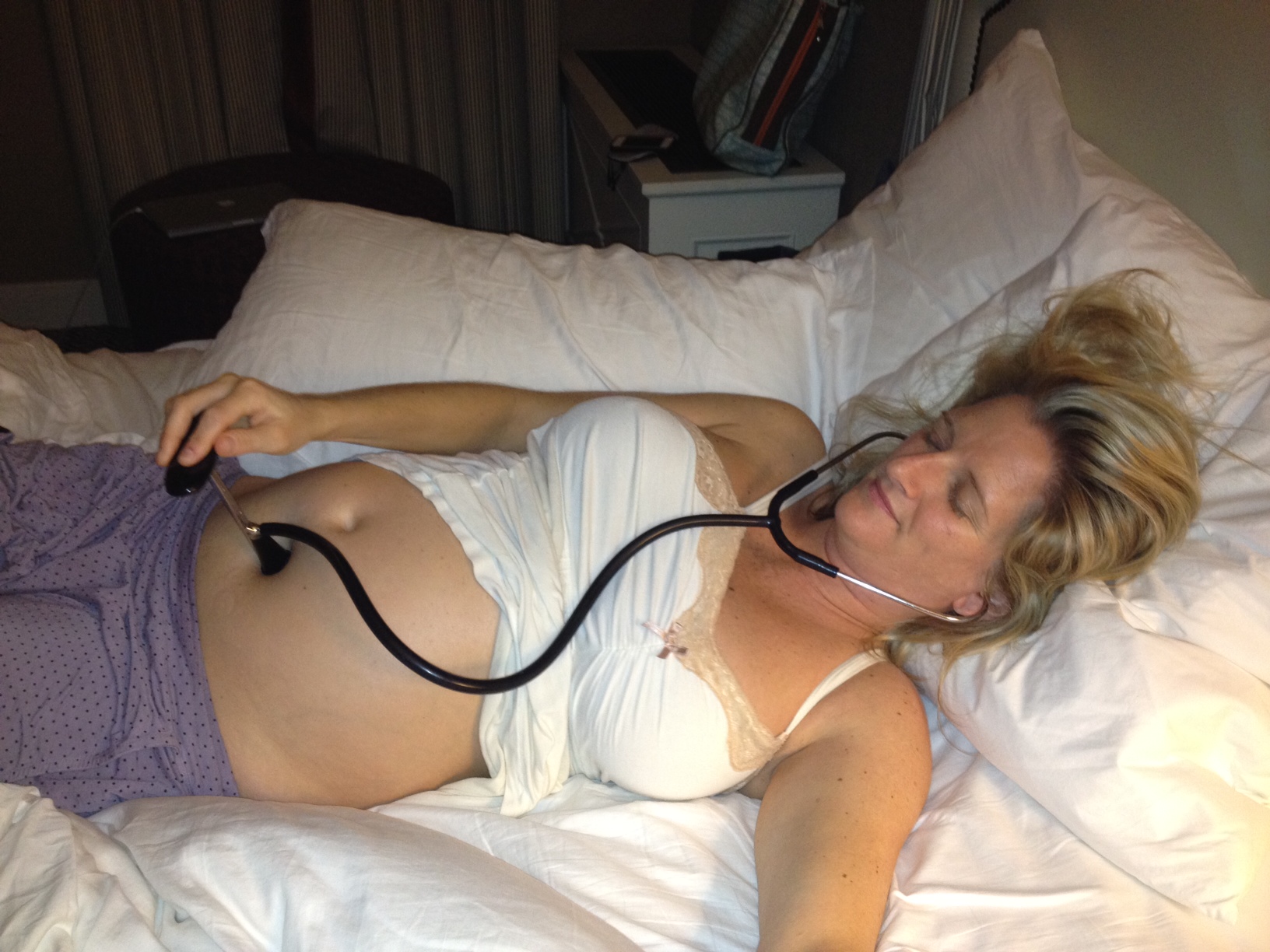 Listening with a fetoscope or doppler may be helpful, but not diagnostic. Location of the heartbeat is not a reliable indicator since sound travels through water. Expertise with listening to many babies helps sort out the difference but is still not diagnostic, only another important clue. Sometimes the heartbeat can be heard far from the heart when the physician or midwife uses a doppler. A doppler is a handheld monitor that uses ultrasound (sonogram) to detect the heartbeat. A firm tummy allows the heart rate to be heard a distance away from the baby. So does ample amniotic fluid. Water carries sound.

I had one child, breech vaginally.  I would not let them do an ultrasound so I escaped the knife. -Dr. Lucia Lein, DC, about her own birth which occurred too quickly for a cesarean to be done in labor.

The drawings begin with the four quadrants of a belly map. A simple circle can be drawn on a piece of paper. Then draw two crossing lines; the lines cross at the navel. Next, the bumps and wiggles that the mother with a breech might feel when she is lying down are drawn on the map. 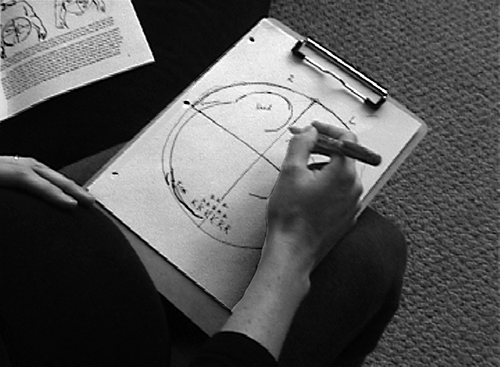 Details that will help you think about what you are feeling:

The doctor won’t do a cesarean for a head down baby s/he mistook for a breech. And, if the parents desire a vaginal breech birth, a sonogram can locate the placenta, check for head flexion and help the parents and physician predict what type of breech position the baby may be in once labor begins. The legs can change position in early labor, so the actual position is not for sure until the baby is coming through the pelvis in the pushing stage of labor. Even some ultrasound technicians are not accurate at telling the finer details of fetal position, so parents should ask, if they decide on an ultrasound, to have the baby’s position explained to them in detail. 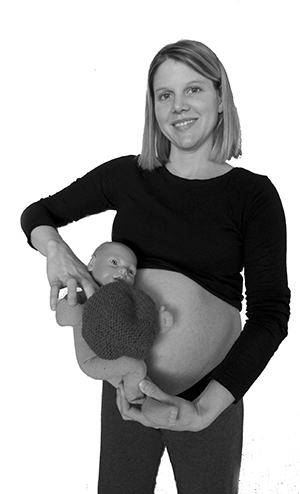 When a breech position is suspected using the maternal Forward-Leaning Inversion and Breech Tilt exercise can help the baby flip head down. These exercises and more are included in our 6-day plan for Helping a Breech Baby Turn. Read more about what to do for a breech baby in pregnancy in When Is Breech An Issue?. For a lot about breech read Breech. 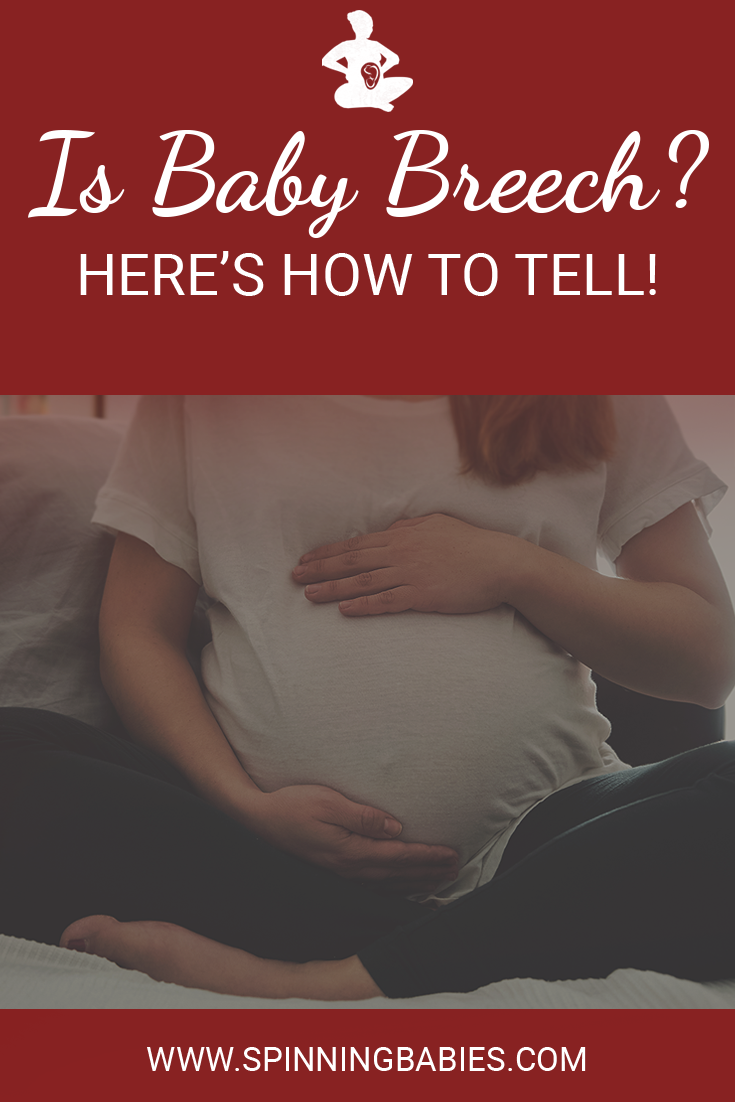